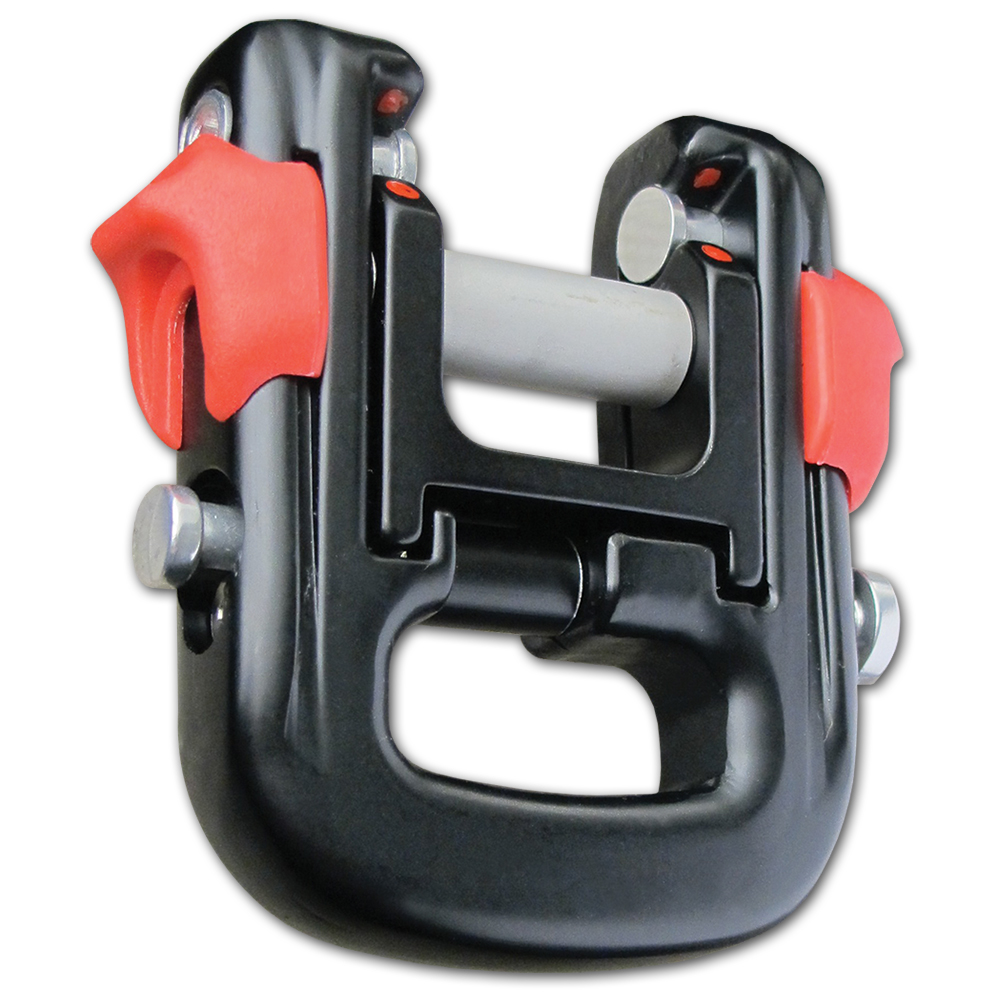 Our separation karabiner Finsterwalder QUICK-OUT is used whenever a reliable connection and if necessary a rapid separation also under load is important. It is suitable for the safe attachment of loads - in particular persons - and for outdoor use. It has proven itself especially during helicopter missions of the police, the military, and the mountain rescue service. In paragliding, the Finsterwalder QUICK-OUT is used for the separation of the paraglider when a steerable rescue system is deployed.
By simultaneously pushing both release buttons, pilot and aircraft are separated effortlessly. In safety trainings, the separation of the glider after a rescue chute deployment turned out to be advantageous.
Besides the rescue options in case of emergency landings in water, trees, and high winds, the Finsterwalder QUICK-OUT also offers handling advantages compared to conventional karabiners.

Usage at paragliders with a speedsystem is permitted only in combination with a patent SHAKLE SEPARATION SYSTEM or a BRUMMEL HOOK SEPARATION SYSTEM.
The Finsterwalder QUICK-OUT has to be installed according to the directions of the harness manufacturer and requires regular care. It has to be cleaned after contact with aggressive media (e.g. sea water) or with sand and dust because the buttons might jam otherwise. In case of humidity in combination with temperatures below freezing, there is a danger of icing. If the buttons are blocked, the karabiner can not be securely locked anymore. An improper locking of the karabiner is optically recognizable.
Swapping the QUICK-OUT release buttons is dangerous to life. In our instruction manual, we hence point out that the release button located on the opposite side of the installation slot must not be dismounted when attaching the carabiner to the harness. It may only be removed for cleaning purposes after the carabiner had been exposed to salt water. However, to prevent swapping the release buttons, only one button at a time may be dismounted.

One QUICK-OUT karabiner (which is attached to the harness) can be used in combination with several QUICK-OUT inserts (which are attached to the aircrafts). Extra QUICK-OUT INSERTS should be ordered together with the QUICK-OUT housing so that the smooth functioning of housing and insert can be tested by the manufacturer.
Information on the fatigue endurance of air sports carabiners

Paragliding carabiners are subject to permanent load changes during flight. Measurements by the DHV show that they can amount to between 10 and 110 kg and more, depending on pilot weight, pilot flight behavior and thermals, and that they can occur up to 26 times per second. Given the carabiners' high breaking load (at least 1.500 kg), such load changes should generally be unproblematic. However, conventional carabiners exhibit a construction-related peculiarity: their play in the gate. This play is necessary for the snap hook to open and close frictionless. However, the snap hook is force-locked only at weights of 30-120 kg (depending on the amount of play in the gate). As a result the pilot flies as if the carabiner lock was open within the range of the play in the gate. Since the carabiner construction - as practice and dynamic fatigue tests show - is not designed for such load cases, already the relatively low operating load during normal flight operations can lead to breakages due to material fatigue. As the play in the gate cannot be reliably limited and as it is difficult to control, we have constructed the SNAPLOCK in such a way that it is fatigue endurable also within the range of the play in the gate. Please note: Not all carabiners are tested for fatigue endurance. Special caution is required when the carabiner manufacturer does not give information about the replacement interval.
Steel is good ?